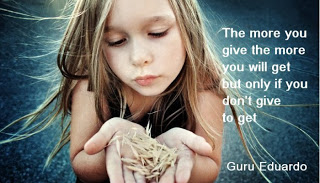 I have always worked on the hypothesis that the more I give, the more I shall receive. And every time that I have tried it out, I have seen it to be true. Each successful trial strengthened my faith in the statement and, therefore, I try to give as much as I can, of all that I can. You can call this selfish selflessness if you wish but that is the truth as the Dalai Lama put it - “Be selfish. Be generous.” In that sense, there is no difference between selfishness and selflessness. When one is ‘wisely selfish’ one is automatically selfless because one realizes that the greatest good comes out of being selfless.

Forgive that little detour of mine. What I intended to say was that, even when it came to the matter of me sharing my experiences with my Master and God, Bhagawan Sri Sathya Sai Baba, I followed the same hypothesis. I felt that

(Disclaimer: On the spiritual path, it is each man for himself; or a woman for herself. This is not a general rule but my observations in my experiences.)

Thrilled by this, I began to speak and share more. I received more. And then, all of a sudden, on the 24th of April, 2011, He left the physical. I was devastated. Among the several things that I asked Him and prayed, was this question.
“Swami, now, I shall share even more. I shall do so via the internet on a much larger scale. How will you keep your end of the promise and give me more? Is this the end?”

Today, I place my hand on my heart and say that Swami has kept His end of the promise. Hey! Wait a minute! He never made that promise in the first place. I just thrust my hypothesis on Him. But loving that He is and knowing how much my hypothesis means for me, He chose to make it ‘His promise’ and also ‘keep it up’ without fail.

Several instances after the ‘Mahasamadhi’ (That word refers to Baba’s leaving of the physical. It also represents the space where His earthly remains have been enshrined. come to mind. There are the vibhuti manifestation miracles, the miracles at the Mahasamadhi and so on. Each instance shows a different facet of my beloved Swami. Here, I would like to recount a couple of instances where His beautiful playfulness is seen, even today.

The 14th of January every year is celebrated as Sankranthi - a harvest festival which also coincides with the transmigration of the sun from one zodiac to the other. It is the day of the prize distribution for the students of the Sri Sathya Sai institutions. In the evening, the students put up a cultural programme. So, on 14/01/2013, when the prize distribution programme was on, I was in the Sai Kulwant hall in Prasanthi Nilayam, covering the event as a photographer. My cell phone vibrated and I saw that my father was trying to contact me. Since, it is not allowed to use cellphones in the premises (we are allowed to carry them for emergencies, just like the FBI is allowed guns even aboard aircraft!), I walked into a room. My father’s voice was very excited,
”Aravind! Vibhuti (holy ash) has appeared at home!”
“Where?” I asked.
“On the silver Ganesha pendant. It has formed as a small heap on it. The best thing is that the vibhuti is sweet in taste. Both me and Pooja (my wife) tasted it.”
“Wow! Let it be that way. I will come home and have a look at it.”

Needless to say, I rushed home even as the programme concluded. I went straight to the altar, to that little silver plate in which the silver pendant of Ganesha rested. There was not a pinch of vibhuti there. I was disappointed with my father. What was his hurry in clearing up the vibhuti?
“Dad! Why did you clear the vibhuti into a box. I told you to leave it as it is.”
“I did not clear it. Nor did Pooja. It should be there.”
It wasn’t there definitely. Pooja and dad came into the room. They swore that they had tasted it. As proof, my dad also showed me the picture taken a few hours before. Indeed there was vibhuti.

As it became clear that the vibhuti had disappeared as mysteriously as it appeared, my father rejoiced. For him, this was like two miracles on the same day. I was not happy. I would have been happier with only one miracle instead of two! I kept pouting and complaining to everyone at home for the rest of the day about how unfair Swami had been towards me. The sense of injustice was magnified by the fact that I was doing my duty in the temple while people who sat at home enjoyed a sweet snack!

Even as I went to bed, I kept complaining. The last thought before I slept was,
“Swami, you have been unfair to me.”
The next morning, my first thought too was the same! I continued to grumble and complain. I wanted Swami to feel guilty and so, I did all the morning worship - placing flowers in the altar, lighting lamps and the incense sticks. Having done that, I told a bye to Swami and was leaving for office. As I reached the main door, something stopped me. I felt an irresistible urge to go back to the altar. And as I reached the altar, the sight simply stunned me.


EXACTLY LIKE THE PREVIOUS DAY (the way I had seen in the photo), there was a little heap of vibhuti on the Ganesha pendant! I quickly took a pinch of it and put it on my tongue. Not only was it sweet, it also had an elaichi (cardamom) flavor! I immediately summoned everyone. As he put the vibhuti on his tongue, dad remarked,
“Swami forgot the elaichi flavoring yesterday. That is why He withdrew the stocks and sent us fresh stock today morning!” We all laughed out aloud. I was simply happy and thrilled.

As I looked into His eyes in the picture, did I see a gleam of mischief in them?

Swami, on several occasions has done such mischief - taking away something and then returning it again. One interesting episode was what I read in a Radiosai article about Mr. Joga Rao. It brought out exactly this kind of leela of Swami.

When the document of the Sri Sathya Sai Central Trust was to be registered at Hyderabad in 1972, Baba asked Joga Rao to coordinate all the related work apart from organising Swami’s visit to the city. It was obligatory that the members of the Trust be present at the time of registration. Therefore Joga Rao called up the Rajamata (Queen Mother) of Nawanagar (a princely state in India) who was at Bombay, to come to Hyderabad along with Sri Nani Palkhiwala (the renowned jurist and economist) and Sri Indulal Shah.

The Rajamata conveyed to Joga Rao the same evening by telephone that she would be coming to Hyderabad with Sri Indulal Shah. She also informed him that Palkhiwala who had gone out of station would not be able to make it to Hyderabad. Since Bhagavan had had already retired by that time, Joga Rao could not convey the message to Him.

When Joga Rao went to the post office next morning along with Sri Prasada Rao, then the State President of Sri Sathya Sai Organisations of Andhra Pradesh, he found a telegram sent by the Rajamata to Bhagavan confirming her arrival. When they met Swami and handed over the telegram to Him, He read it and said,
“Joga Rao, they are not coming!”
Puzzled and bewildered, Joga Rao read the telegram again and again. According to the telegram, what Baba had said was perfectly right! Joga Rao showed the telegram to Prasada Rao. They looked at each other in wonder and could not believe how they had bothe mistaken the telegram when they read it at the post office.

During their lunch with Swami, He laughed and gave them the telegram again. This time, it bore the same words they had read at the post office!

I cannot help but recollect the most recent vibhuti prank, if I may call it so.  During my student days, I got several opportunities to witness the handkerchief mischief of my sweet Lord. And now, vibhuti pranks seem to be the new genre! This happened on the morning of the 24th of July, 2013.

As is my practice, I woke up at 6am and put on the lights in the altar. I wished my Swami a ‘Good Morning’ and I then moved into the bathroom for my morning ablutions. I came to the computer to do some typing when my wife, Pooja, called out to me.
“Come here fast....”
I did go there ‘fast’.
“I just bent down to clear these flowers. When I stood up, this had happened!”
The ‘this’ in her statement referred to the copious amounts of vibhuti that had appeared from two photographs of Swami. I was happy.

As we called my dad to the altar, in the few moments we were not at the altar, a fresh vibhuti shower had taken place! We were simply thrilled. 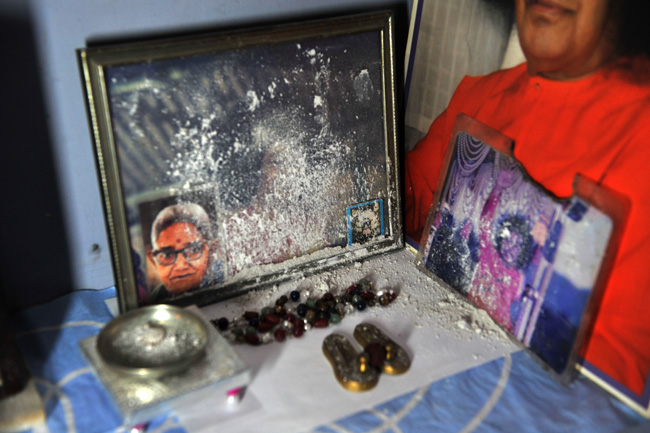 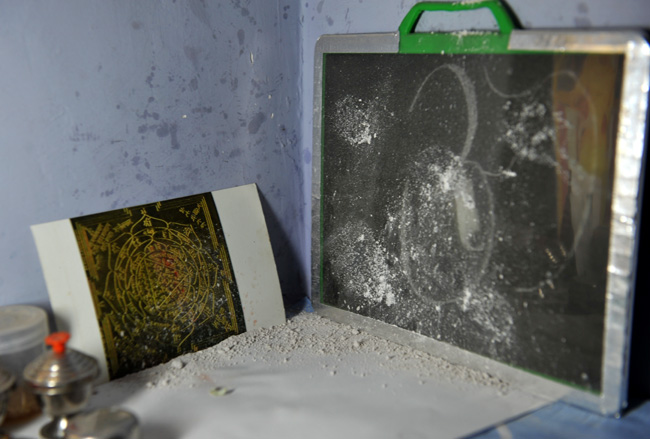 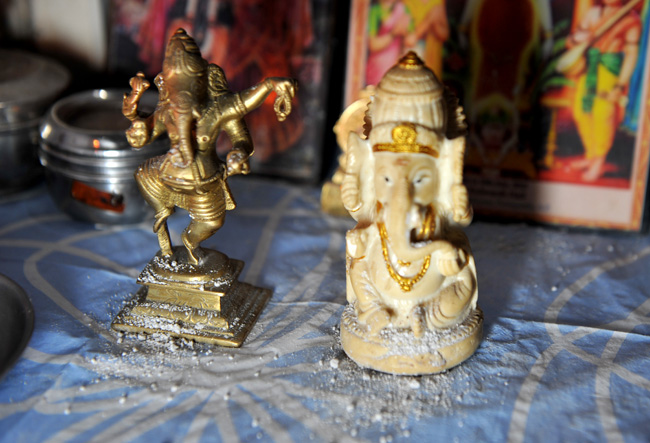 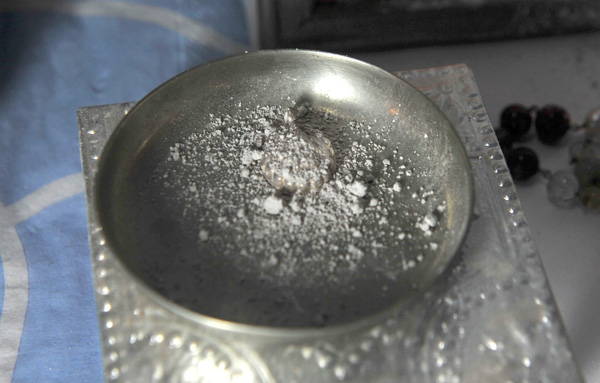 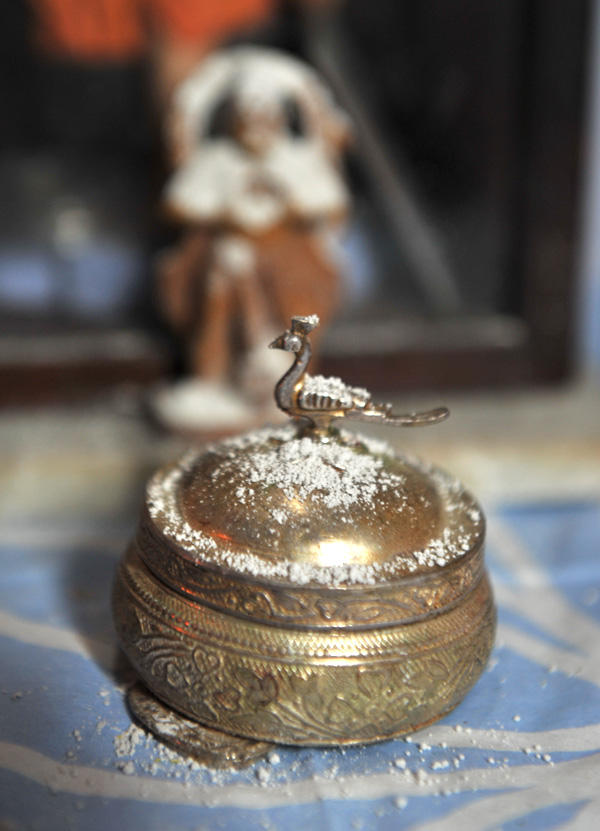 In joy, we called out to our dear neighbors, the Deshpandes. (Amey, about whom i have written several articles, is the son of Deshpande uncle.) By the time uncle came to the altar, some more vibhuti had manifested. This was simply getting thrilling. I just tapped on a silver container up front (which contains a Shiva linga) and said,
“This is the only container that has not been touched by the vibhuti.”

Even as I said that and all of us walked with uncle to the door, vibhuti had manifested on that silver box too.


I once again looked at Swami’s eyes in the main picture. There was so much of mischief in them. But there was so much of love too pouring from them. I just closed my eyes in gratitude and told Him,
“Swami, you continue to keep your promise! I shall keep up my end of the deal too! I will share this with all.”
source:http://aravindb1982.blogspot.dk/2013/07/vibhuti-manifestations-sathya-sai-keeps-up-his-word-and-pranks.html

- Vibhuti manifestations: Sathya Sai keeps up His word and His divine pranks too

- God should be the first resort; not the last one

- A memorable journey in a time machine

-If you look to me, I look to you : A Christian's life-changing experience