It was a rainy day in the summer of 2006. The 11th day of May showered unexpected cooling drops on the simmering city of Bengaluru in India. As the gathering of more than 4000 people in the Sai Ramesh hall at Brindavan felt the coolness in their bodies, a gentle music filled the air, announcing the arrival of Bhagawan Sri Sathya Sai Baba. The darshan and bhajan session was about to begin and everyone in the hall seemed to experience a cooling in their minds and hearts as well!

As I sat in the front with the students of the University, I was filled with joy and excitement at the sight of the figure in orange. Needless the say, the energy of the bhajan session went up several notches. Five bhajans later, Swami asked for the bhajans to be stopped. He beckoned to renowned singer, Begum Parveen Sultana who was seated on the ladies side. The ever-ready devotee that she is, she took the microphone and, saluting Swami, began singing. It was an excellent rendition which included a couple of Meera Bhajans (songs composed by the legendary devotee and singer, Meerabai). The session concluded after half an hour with Swami receiving the Aarthi.

That day, during the Trayee session, Swami walked into the jhoola room (the room with the ornate swing) and congratulated all the students who had accompanied the artiste during her musical performance. He called out a group of boys whom all the students had come to recognize as the “Meera Boys”. This was a group of students of whom Swami always asked for Meera bhajans to be sung. Each of the four singers had specialized in a song of his choice and every time, Swami made each singer sing his song. So numerous were the occasions when we had heard this group of boys sing their song that whenever Swami asked for them, the whispers that would go around were,
“Swami has switched on MTV - Meera TV.”
That was the code that the students had mischievously developed. But the fact that a ‘code’ had developed showed that Swami had indeed been very intent on listening to the Meera Bhajans on a regular basis.

Lord of the Rings in Trayee Brindavan

Even as Swami called these boys, He began to encircle His right palm. He materialized two rings in a go and gave one to a singer and the other to the boy who accompanied the singers on the tabla. Once again, He waved His palm and materialized two more rings for the two other singers. Then, another wave and another ring followed for the fourth singer. Each of the five rings fitted the ring fingers of each student perfectly.
“Perfect size”, Swami said with a gleam in the eye and all of us just smiled in joy and wonder.

Swami began to sing along with him - word to word! Swami also told the other singers to join in the song. It was a mesmerising experience. It is one thing for the devotee to sing out to the Lord, but to have the Lord reciprocate in the same measure with the same intensity is not something everyone gets a chance to see because the Lord is a silent lover and a silent worker. But today was a special day. Swami sang along,
“Life without you, for me, is like a lotus with water; a moon without the moonlight...How can I stay happy without seeing you my beloved?”

As He sang, Swami’s face became emotional. The intensity of feeling of the Lord for the devotee, Lover for the beloved and the Master for the disciple seemed to be echoed in His words. Ah! The bliss of that vision of the Lord pining for the devotee can never be suitably described. When that song was complete, Swami was not satisfied. He asked the other singers to sing the other bhajans as well. And once again, He was lost in those bhajans composed by Meerabai. I could not help thinking thus,
“Meerabai’s life is sanctified multiple times. She pined for her Lord and such was the intensity and love that she put into the songs that five hundred years later, the Lord seemed to be pining for such devotees. Blessed are you Meerabai...”

After those songs, Swami materialized two more rings for two more boys. It was evident that He was very happy. And it was clear that something about the Meera bhajans made Him so.

I remember on another occasion, during another Trayee session, Swami had explained beautifully to Koustubh the meaning and emotion of every line of the song which he used to sing. In fact, it had been Swami who had inspired him to compose the tune for that bhajan in the Darbari raag. He explained about the climax of the song in this manner,
“Meerabai feels that her life is worthless if she is unable to glimpse her Lord Krishna. She rushes to the threshold of the sanctum and begins to bang her forehead on it. She implores to Krishna that she is His servant forever and curses her mind and intellect that are blinding her to her heart where her darling resides. She continues to bang her head...”

As Swami explained this to Koustubh, He moved His head vigorously to show how Meerabai banged her head! He seemed to be totally lost in her devotion. He continued to say,
“Instead of death, she gets the vision of Krishna. She feels she cannot live without Krishna but even Krishna cannot live without her...”
And there is a tear in the divine eye!
I still remember, the very next day in Trayee Brindavan, a screening of the movie, Meera, with the legendary M.S.Subbalakshmi playing the lead role, was arranged. MS was an ardent devotee of Baba and Swami couldn't contain this double-devotee (Meera-MS) delight that the movie was. It was a moving session for all.

It made my respect and awe for Meera grow. I wished to develop an iota of her love and pining - something which even the Lord thirsted for!

As Koustubh confesses, many were the occasions when Swami had spoken to him about Meera’s pining. And on every occasion when he sang, Swami made it a point to tell him,
“You are singing Meera’s bhajan but you do not have those feelings.”

The force comes from the source and not forcibly

Such was Swami’s adulation of Meerabai that soon she grew into Koustubh's role model for devotion and pining. But try as hard he did, he was unable to plumb into the depth of his heart when he sang that Meera bhajan. And yet, every time he sang it, Swami would taunt him for the lack of feeling and intensity.
“You have to feel like Meerabai... You must have that intensity of love... It is not seen at all on your face...”

That was too much for Koustubh to take. He constantly prayed in his heart,
“Swami, you are the one who filled Meera’s heart with love divine. You must fill my heart too in the same way. Then alone will I be able to have that intensity.”

But at the same time, he put in his efforts too. The next time Swami told him to sing that bhajan, he began to contort and distort his face in a desperate attempt to build intensity and emotion. He was not feeling anything in his heart but he had to show intensity! So he literally ‘acted’ out the song. Everyone around were thoroughly impressed. Not Swami though!

“You got so many feelings on your face but there is not a single tear in your eye...”, He pointed out much to Koustubh’s embarrassment.
“Only if you feel like Meera, can you sing like Meera...”
That statement only redoubled Koustubh’s enthusiasm to develop along the lines of his role model. He began to spend more time dwelling on the meaning of the song. He related various lines of the song to his relationship with Swami.

In his own words,
“I developed an irresistible pining to become like Meerabai. Seeing how moved Swami would be, thinking of Meerabai, I too wanted to become dear to Him like Meerabai. I wondered when that would happen...”

This intense pining to develop a pining for the Lord had been a result of Swami’s constant taunts. However, the beauty lay in the fact that Koustubh had not got pressured to develop such pining. Swami’s taunts had only inspired him to become so. This is one subtle yet lovely aspect of Swami. He never tells anyone directly to do something and express disappointment when he/she fails to do so. Instead, He showers him/her with so much love that he/she gets overwhelmed. Then, Swami only states what He likes and dislikes. That is enough to make the student pine to do what He likes and keep away from what He dislikes!

His love is the reason why anyone gets inspired to do something. Nobody ever feels that he/she is doing something for Swami forcibly. Love is the Force that comes from the Source! 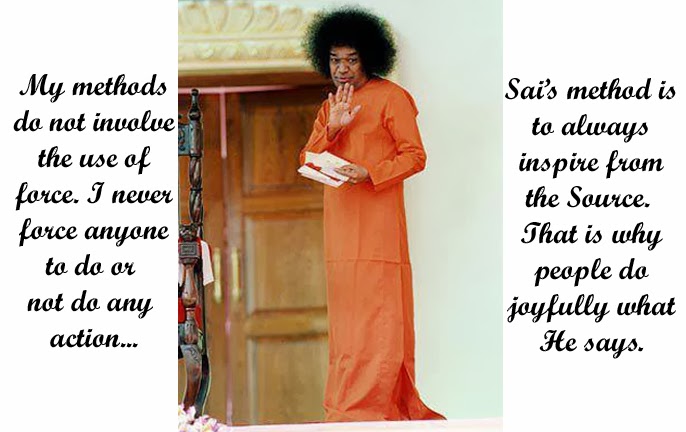 Koustubh had no idea then that he would be picked and chosen to accompany Swami to Kodaikanal in the summer of 2007. He had been to Kodaikanal in 2006 when Swami encouraged him to sing Meera bhajans. A second trip in a row was unimaginable for him. He had an even lesser idea that he would get his first opportunity to experience Meerabai’s love and devotion first hand during the trip. But as the saying goes, everything with the Lord happens at its perfect time.


to be concluded in the next part...