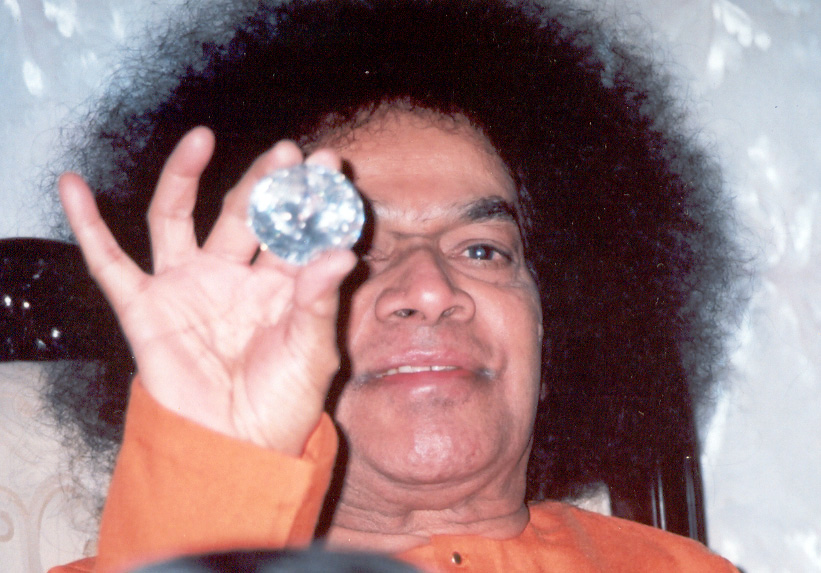 “Since I move among you, eat with you and talk with you, you are deluded into the belief that this is, but an instance of common humanity. Be warned against this mistake. I am also deluding you by singing with you, talking with you, and engaging Myself in activities with you. But any moment My Divinity will be revealed to you; you have to be prepared for that moment. Since Divinity is developed by humanness, you must endure to overcome the Maya that hides it from your eyes. Never forget that I am Super Human Divinity in human form.”
- Baba

These words of Bhagavan were like a dash of cold water jolting me awake from the delusion my mind was slowly cocooning itself into, thinking Bhagavan to be a wonderful, loving friend. These words made me remember once again that it is indeed God in whose presence we are spending the best part of our lives. Yet, it is indeed God who teases us, jokes with us, makes us laugh and is so charming and endearingly ‘human’ that we tend to forget His Divinity.

Bhagavan once said, “If I had come amongst you as Narayana with four arms holding the conch, the wheel, the mace and the lotus, you would have kept me in a museum and charged a fee for those who seek Darshan.” In the same way, may be if we are all the time in awe of Bhagavan and shake and shiver in His presence, maybe we would not have been able to enjoy the wonderful sweet relationship that we enjoy with Him now. So, Bhagavan in His mercy has come down to our level and talks and behaves in such a fashion that we can feel kinship with Him.

Bhagavan is like a multifaceted diamond, each day revealing more wonderful facets of Him. It would be impossible to capture and write about His many moods, actions and behaviour. Here, I would like to pen down some of the aspects of Bhagavan, which have particularly touched me.

Bhagavan is as affectionate as a mother, as lovingly authoritarian as a father, as considerate as a teacher, as forgiving as God. So, He is loved by all who long to secure a loving mother, a wise father, a sympathetic teacher and a compassionate God.

“I ask only that you turn to Me when your mind drags you into grief or pride or envy. Bring Me the depths of your mind, no matter how grotesque, how cruelly ravaged by doubts or disappointments. I know how to treat them. I will not reject you. I am your Mother.”

Bhagavan says, “My love for you is more intense that the love of a thousand mothers. Your mother may be with you in this birth, but I’m with you birth after birth, showering My love and care on you. I’m your real Mother.” A fine example is the relationship between Bhagavan and His students. It is difficult to describe Bhagavan’s limitless and unbounded love and compassion for the students. He looks into all the needs of the students from routine mundane matters such as breakfast and lunch served, to the health and well being of all the students. He knows the spiritual needs of His children and administers the spiritual teachings in such a way that we can easily grasp and practice His teachings in our daily lives. Regarding Bhagavan’s motherly love, the incident, which really touched me, is as follows:

Meanwhile, the repairs and delays took some three hours and after that they resumed their journey and when they reached the destination, they found Bhagavan waiting anxiously for them. Beloved Mother Sai, who usually retires by 8:00 pm, was pacing up and down near the gate for three hours, waiting for Her children to come.

After that, Bhagavan, with much love and affection, took all the boys inside and said that they must all be hungry and tired because of the journey. Then He made arrangements for the food and patiently went and saw to the comforts of each and every boy. Only after the boys finished eating did they realise that Bhagavan hadn’t still eaten. Whose Love can be more vast and who can be more compassionate than our Mother Sai?

“I alone know the agony of teaching you each and every step in this dance of life. My life is my message.”

Bhagavan’s work is so universal and practical that the modern world will slowly come to apply. His entire life is a meaningful and inspiring message. At the material level, one of the best gifts that Bhagavan has given to humanity is the unique Sai Educational system, which now become famous all over the world for its excellence and effectiveness. Apart from imparting academic instructions, special attention is given to the development of moral, ethical, spiritual and human values.

At the spiritual level, He guides each person in the spiritual path, according to his nature and knowing his capacities and weaknesses. He is aware of each person’s spiritual position and modifies the teachings in such a way that they can be easily grasped and put into practice. To some, He has prescribed strict penance and sent them to the Himalayas after making them renounce their worldly attachments. To some others, He has prescribed Namasmarana. He asked many others to form groups and serve the society. Thus, His teachings and guidance vary from person to person according to their needs and also the nature of the person concerned.

Bhagavan has expressed His artistic talents right from His childhood. As a child, He composed songs and poems, acted in dramas, even dressed Himself as a lady dancer and and gave a professional dance performance! He continues to compose poems and songs during His discourses. He directs plays and guides the students in acting, as well as dressing each character in the play. He is a good musician too, and is quick to find and correct faults not only in the songs but also in the accompanying music.

Bhagavan is a good architect too. The designing and construction of all the buildings in the Ashram as well as the educational institutions and also the Super Speciality Hospital have been done under the direct supervision and guidance of Bhagavan. During the installation of the huge Hanuman statue in the Hill View Stadium, when the engineers and other architects were struggling to find a suitable posture for the size of the statue which could stand in perfect balance when installed, Bhagavan materialised a miniature statue with the right posture and solved their problems of months in a minute.

The main aspect of Bhagavan that has attracted millions of people from all over the globe is His selfless love, unsullied by any attachment or partiality; flowing alike to the rich and the poor, the old and the young, the intellectual and the ignorant. 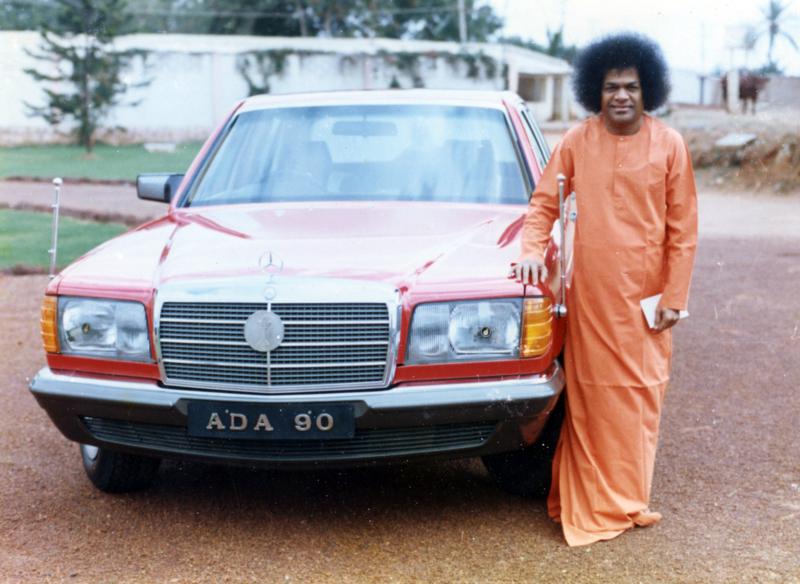 I would like to cite an instance to show that Bhagavan’s love is not influenced by the material status, caste, creed and so on. Once, when Bhagavan was staying in Bangalore at the bungalow of a rich devotee, many people were flocking to the bungalow to see Bhagavan. A cobbler sitting outside also wanted to have Bhagavan’s Darshan and hence went inside with a bunch of half - dried flowers. Bhagavan came near him, accepted the flowers and asked him what he wanted. The cobbler said that Bhagavan should come to his house and bless his family. Bhagavan agreed and went away, but the cobbler wasn’t satisfied because he didn’t give Bhagavan his address and went home not quite happy. But a few days later a car stopped in front of him on the road and Bhagavan was seated inside. He beckoned the cobbler to join Him and they went to the cobbler’s hut. There Bhagavan blessed and created sweets for the man’s wife and children. He also sat on a wooden plank and leaning against the wall, ate the fruits offered by them, all the while talking to them. Later Bhagavan returned to the bungalow.

Bhagavan expresses His love in various forms, a few of which are as anger, humour, pranks etc. It is not always serious and weighty matters that Bhagavan discusses. Bhagavan is witty and humorous beyond our imagination and at times delightfully plays with words. He can bring different meanings and perceptions from things that seem so ordinary. Being the perfect Divine teacher, He uses humour effectively to drive home His point. It is Bhagavan’s humour that acts like a ray of sunshine and brightens our lives and whenever we recall His words, our hearts are aglow!

Once a sceptic told Bhagavan, “If you change our Indian Ocean water into petrol, all our country’s financial problems will be solved.” Bhagavan said, “I don’t want to, because people like you might throw a lighted matchstick into it by mistake!”

Once, Professor Kasturi was consumed by the desire to receive a Mantra from Bhagavan. Having mentioned this to Baba, he bathed himself in the Ganges and fasted all morning to receive it. Morning hours passed and noon came. But no Mantra. Lunchtime, he was seated next to Bhagavan. Bhagavan asked, “Kasturi, why aren’t you eating?” “The Mantra...” began a miserable Kasturi. “What is the purpose of getting a Mantra?” asked Bhagavan. “To get closer to God” was the reply. Baba looked at Kasturi’s arm and then at His own. They were almost touching. “Well,” He smiled in His Divinely down to earth way, “How much closer do you want to get?”

Bhagavan is indeed a unique multifaceted diamond, precious and priceless!