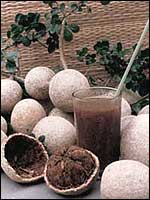 Also called elephant apple and monkey fruit, wood apple is vilampazham. In the years that I learnt and taught botany, it went by the botanical name of Feronia elephantum but today it has a new botanical name: Limonia acidissima. Why, you may wonder. That is a bother for serious students of botany. They have their nomenclatural rules which they are obliged to follow. According to these rules, a quinquennial review of botanical names is made, and a change of name recommended, if warranted. We are under no obligation nor do we have to grapple with the problem. So, we’ll let the matter rest at that.

The wood apple tree is quite common through all the dry districts of India and I sighted a few of them in the compounds of some institutions and residential bungalows in Chennai. Wood apple, as one of its aliases (elephant apple) suggest, is the favourite of elephants. Naturally, the Hindu Elephant-headed God, Lord Vinayaka, is propitiated with an offering of this fruit.

The tree is moderate-sized. It is a deciduous tree, with straight strong axillary spines. It has a much-branched dense crown of dark foliage and dark grey, longitudinally furrowed, rough wrinkled bark. The leaves are compound with 3-7 paired leaflets arising from either side of the rachis, ending with one unpaired leaflet. The main rachis as well as the stalks of leaflets are narrowly winged, i.e. narrow, green leaf-like structures from a border to the stalks. On the leaves are faint oil-gland dots.

The fruit is quite large, about 3 inches in diameter, globose and single-chambered enclosing several seeds in the dark green pulp, traversed by incompletely grown fibres. The rind is woody, hence, the name, wood apple.

The pulp is slightly sweet and so in consumed mixed with sugar/honey. The pulp of an unripe fruit is sour to taste and is made into chutney by mixing it with a paste of green chillies, salt and suitable spices.

The wood apple has several medicinal properties. It is antiscorbic, i.e. it prevents scurvy, a disease caused by lack of vitamin C (ascorbic acid). It is an antidote for poisons and also helps in curing sore throat. After the rains, the trunk and branches give off a gum called ‘Feronia gum’, which counteracts diarrhoea, dysentery and diabetes. However, this statement should not be understood to mean that the gum totally cures these diseases. May be, it serves to mitigate the problem and no more. 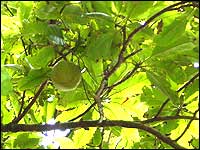 Now to the question: Why elephant apple? In fact, the older botanical name indicates the elephant connection in that the specific name is ‘elephantum’. Undoubtedly, elephants are fond of the fruit. For an animal that wholly survives on plant parts, including the bark of several trees, it is not a surprise that elephants are especially attracted to this fruit.

There is more to it than the mere fondness which the elephants have for this fruit. The rural folk believe that the digestive track of the animal has a peculiar capacity for digesting the inner contents of the fruit without in any manner affecting the fruit’s woody rind. So, as the animal defecates, the fruit comes out looking as if it is whole. How far this is true remains verifiable but that this belief is not wholly confined to tribals but has percolated even into the urban milieu is borne out by the fact that in the literature of local languages - at least Telugu, as far as I know - lends some credence to the belief.

Moreover, why is that specific name of ‘elephantum’ there in the original botanical name of the plant? May be there is a modicum of truth in the belief. I wish some visitor to the site would be able to throw some light in the matter